A review of the novel Ostrich by Matt Greene 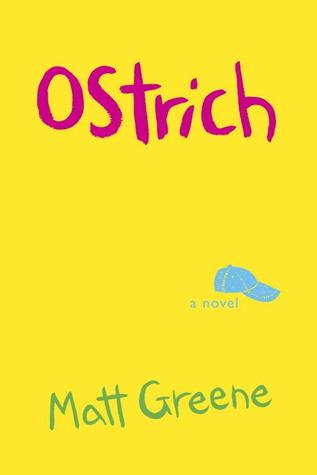 Matt Greene’s near constant play on words, coupled with a surprisingly hilarious and unique approach to the woes of life as a teenager in the 21st century, give his first novel Ostrich all the makings of a classic. Through a stream of consciousness elaborated by parentheses, protagonist Alex examines everything from Schrodinger’s Cat and parallel universes to his parents’ divorce and why exactly ostriches feel so ostracized.

Alex is a complicated character who spends most of his time trying to understand the complexities of everyday life and learning new ways to earn top marks in Composition. In a refreshing twist, he’s plagued by memory lapses and seizures but treats his illness as a side story rather than the main focus of his life; instead of defining him, Alex’s brain tumor is just a small part of who he is and what makes him so intriguing. Although he is only twelve, Alex displays a kind of maturity that makes it easy to forget he is a middle school-aged kid, especially when he reveals his sincere and heartbreaking insight: “Hope is not the thing with feathers. Hope is an anchor. [It’s] what keeps you from floating away. Despair is weightless.” Alex’s candor and matter-of-fact nature resemble that of Holden Caulfield’s in The Catcher in the Rye and his endearing curiosity is similar to the beloved Charlie’s from The Perks of Being a Wallflower. Fans of these stories will surely love Ostrich; however, the convoluted ending and sometimes frustrating syntax make the story somewhat difficult to digest. Matt Greene attempts to relate quantum physics to pop culture phenomena, which makes the topics easier to comprehend on the surface, yet simultaneously suggests that even the simplest ideas can be examined on numerous levels.

“If you believe that a subatomic particle is in two places at once until it is observed, then you believe that the radioactive material both decays and doesn’t decay simultaneously, which means you believe that until you take the lid off the box to have a look, the cat is both alive and dead… In other words, it makes as much sense as Dad refusing to watch penalty shoot-outs in case he affects the outcome. Which is why most intelligent people now believe in Many Worlds.”

If you are willing and able to dedicate the time to an interesting read, then this book is worth it and more. But be forewarned: in a John Green-esque  style, Ostrich does not come without an emotional load  that creates a love/hate relationship between author and reader.