How The Grinch Stole Christmas: An Old Tale With A New Twist 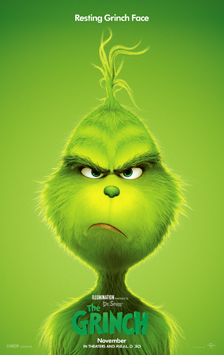 How The Grinch Stole Christmas is one of the most classic Christmas specials in TV history, telling a heartwarming tale about the true meaning of the season and introducing the world to the Grinch. This year’s movie adaptation of the show is not the first time the Grinch has been on the big screen; the 2000 film starring Jim Carrey got very mixed reviews. As such, Illumination had a steep hill to climb when making this 2018 version of the classic story. The plot is nearly the same as both of the adaptations that came before it: The Grinch hates Christmas and comes up with an idea to steal it. He does this with the help of a Santa costume, some crazy gadgets, his dog Max, and reindeer newcomer Fred. Meanwhile, Cindy Lou Who is planning to talk to Santa in order to ask him for a really important wish.

This movie has plenty of highlights. The animation is amazing and really helps bring the movie to life. It gives the Grinch a back story to explain why he hates Christmas (beyond his small heart), which helps flesh him out and actually made me feel sorry for the guy. The Grinch is much nicer, which is also a nice change, as his interactions with Max and Fred were adorable. Cindy Lou getting fleshed out was a huge risk, and it paid off, as she is one of the best kid characters I have seen in a while and she gets some of the most heartwarming moments in the film. The Whos going back to being friendly, joyus people who love Christmas for what it is after being changed into greedy jerks in the 2000 version was a great also change.

Much like the last movie adaptation, though, this movie has flaws. The biggest one to me was the way the narrator sounded. He sounded more like a rapper then a storyteller. Another issue was that beyond the Grinch and Cindy Lou, no other character got any development, including Cindy’s friends and her mother, all of whom are named. What’s more, the new version of the song “You’re a Mean One, Mr. Grinch” isn’t played while the Grinch is stealing everything–that felt off. As heartwarming as the movie turned out to be, I felt like Cindy Lou’s subplot was a little tacked on at some points and I felt like she should have had fewer scenes.

Overall, no adaptation of the Grinch will ever be as good as the the original TV version. However, this was a great film. As soon as I left the theater, I was fully in the Christmas spirit. Despite some flaws, if you liked the original version, you will like this one.