An Inside Look at U

Behind the scenes of South's latest production. 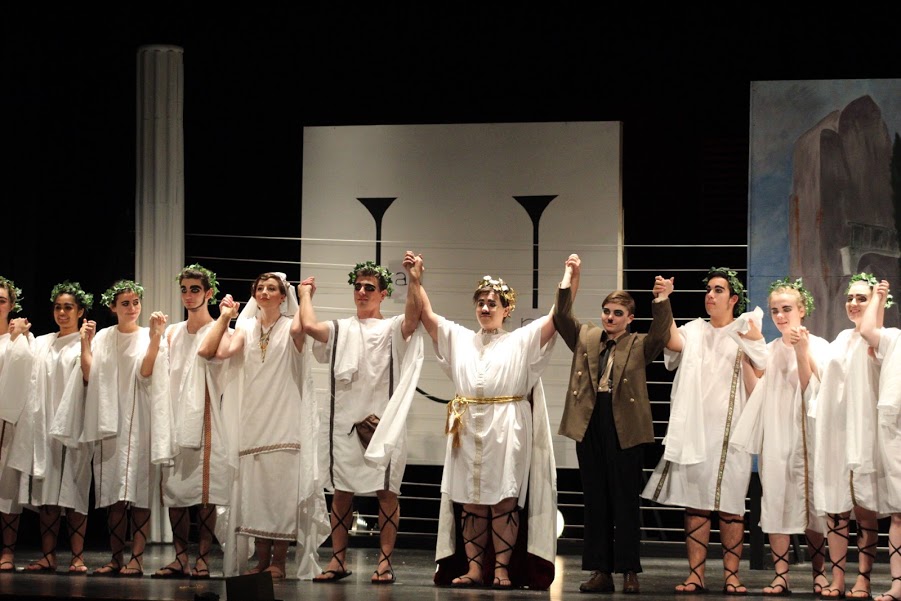 Sitting in on the U dress rehearsal, you could feel the purpose that existed on the stage, the dedication that each actor moved with, and the natural quality that was present within each scene. They make it look easy.

But, as we quickly learned from a short visit backstage, this is far from the case. Behind the curtains of the Midd South Theatre Department lives an almost organized chaos. Standing in drama teacher, playwright and director, Mr. Alexis Kozak’s room in the thick of tech week, we found ourselves surrounded by lively shouts and directions: “Guys! Cast on stage!” someone yelled from across the room. Members of tech crew begin to maneuver power tools and actors walk briskly through the halls.

A brief glimpse into the months of hard work and talent that have gone into producing this play; U is set in 1930s Chicago and weaves together the first half of an old German play with Shakespeare’s Julius Caesar. In many ways, the play is an allegory for Hitler’s rise to power, even going as far to include a radio announcer on the side of the stage who provides a running commentary on Hitler’s actions as they parallel those which occur in the play.

“It just seemed interesting to me to think about putting together two different plays because I had never seen that done before,” states Kozak. “We weren’t taking a thing that totally existed already and then staging it. We were taking something that I wasn’t sure if it was going to work and trying to stage that. What I find exciting about that is there’s not really a wrong way to do it.”

Kozak’s plays are known to stray from tradition, and U is no exception.

“With a musical, a West Side Story, a Mamma Mia!, or something where there’s a lot of preconceived notions about a thing, people assume that if you don’t do it the way that they know, that it’s somehow wrong or has less value,” elaborates Kozak, “whereas in this position, you can only do right. There’s no way to do anything that’s wrong. And I feel like that’s a good creative place for everybody to be in. That’s really what I want and sort of how we bring everybody on board, the actors, the set people, the prop makers, the costume people, the people who are doing the makeup, they’re all doing original work. I think that’s the most important thing because otherwise, we’re just plagiarizing someone else’s work.”

When discussing a theatrical work, the hours of labor put in by the crew may go unacknowledged. However, especially in the case of a play with an emphasis on the exploration of creative freedom, the work of all members of the cast and crew are essential in the production process.

“There are a hundred different departments: makeup, costumes, lighting, sound, set design, construction, set painting,” states senior Evelyn Zoubek, a long standing member of the tech crew, “I try to be a jack of all trades… it’s a lot to handle, it’s fun, but it’s a very high stress environment because you have to get everything done, you’re gonna have to put in shop hours…but what is so special about it is that people want to put in the hours so the show comes out well.”

When you see U, pay extra attention to the set. In the background of the set sits Zoubek’s mural of the Isle of Death.

“I’m really proud of it. It’s the biggest work I’ve ever done,” states Zoubek on her mural.

While understanding the behind-the-scenes process is crucial to appreciating U, perhaps the most important piece of advice for an audience member coming into the play is to let go of any preconceived notions on how theatre should be.

According to Kozak, “You have to be aware of the Hitler thing but then forget about it because this is an alternate reality version where things happen to the Hitler character that don’t happen in history, assuming that the history is accurate. We have taken two very different stylistic plays and we’ve sort of put those together so there is a sort of seam in the middle of the play and you just have to be okay with that, that seam being there and those two things being pieced together. It will make sense, I think if you just allow it to be.”

So if you are lucky enough to see U, know that it is not a typical high school play. Be prepared to expect something different–different, but full of talent and depth.

Be sure to look to our Instagram tomorrow, November 22, to see our weekly Feature Friday, where we interviewed the leads of the play, Danny DeCrescenzo and Camille Pugliese.