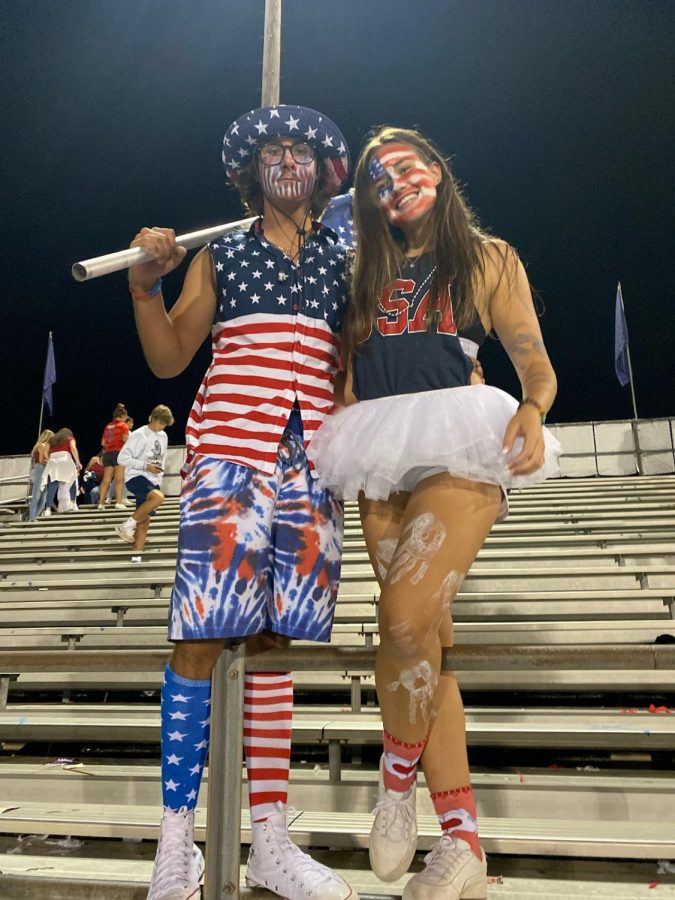 Fall 2021 has brought several changes for Middletown South students, but despite new adjustments, students have had no trouble getting back into football season. After sparse participation last year, South Nation is back. This year, spirited seniors Sean Russo and Meghan Carragher were given the coveted title of Leaders of the Nation. Here, Carragher tells what it’s like to be in such an important position.

The Passing of the Nation Torch

The passing of the torch is an elusive process unknown to most. On the Middletown South Wikipedia page and Midd South Nation’s Twitter (@MiddsouthNation), there is no written record describing how the process operates. One might assume there’s a classified ritualistic ceremony involving candles and cloaks, or an anonymous, handwritten letter delivered to the doorstep of the chosen ones. Unfortunately, it’s not that interesting.

Carragher told The Eagle Eye, “I received a FaceTime call saying I was chosen to be the Nation Leader. [Emily and Will] made a group chat and sent out everything that [the job] entailed.” Carragher revealed she was “blindsided” when she learned she landed the sought-after job.

“Randomly, I got a FaceTime call from Will Waldman [last year’s leader, along with Emily Salvadore]. I thought it was weird because I knew they were at a party, but I answered the call and he was frantic, saying ‘Meg, Meg, Meg,’ and about to tell me some big news. In the background, Emily is like ‘I wanna tell her’ and I was so confused. Emily said ‘you’re the new Nation Leader, congrats!’ And I was so shocked, I couldn’t stop saying ‘what?’”

The power came with a learning curve though: “I was worried in the beginning that people wouldn’t take us seriously,” she said. These feelings of doubt were rooted in the lack of a season last year. Fall 2021 is the first time most sophomores and all freshmen have ever been active in the Nation. Wrangling two classes who didn’t know the etiquette and tradition of the Nation has proven to be a challenge.

I asked Carragher what advice she was given from her predecessors.“I can pull it up,” she offered, bringing out her phone and locating a message from Emily. “It’s very long.” She found the group chat consisting of Emily, Will, Sean and herself, and scrolled through lengthy, saved paragraphs. “‘Congrats, you’re now the leaders of Midd South Nation, seriously a huge honor, make sure you take in every second.’” She read in an enthusiastic tone, waving her free hand, as she quoted the message.

She continued reading the message on her phone, “‘So just be responsible and respectful before you post. Think before you post. And it’s important to stay appropriate, but don’t be scared to have fun with it. Post about themes and games and showing up and rivalries, but keep it classy.’”

Running the social media accounts, providing the whiteboard (which houses the sometimes witty chants), making posters, and other game day preparations fall under the responsibility of Meghan and Sean. South Nation is entirely student-organized, thus the preservation of our dignity lies in the hands of students. “Most Nations’ Instagrams say ‘not affiliated’ [with the school the owner’s of the account attend] in the bio. If there’s any problem though, because it’s on school property, administration will take it into their hands. But here, they appreciate South Nation and our school spirit,” she said.

Carragher’s favorite part of her post as Leader is simple: Winning. “It makes being the leader so much easier when you win,” she sighs, I assume reflecting on the ecstasy within the Nation, conjured by our 4-0 winning streak. “When the team does well you have more of a chance to chirp at the other team. If you’re losing, then you just have to sit there and do ‘defense,’” she claps twice, mimicking the encouraging, yet simultaneously demeaning chant. “You have nothing else to say. You can’t be like ‘start the buses,’ you can’t say ‘this is our house,’ ‘get out me swamp,’ nothing like that.”

Along with winning, Carragher lists her other favorite parts as “when they run out to ‘Hell’s Bells’ and Ryan St. Clair [number 27, MiddSouth’s beloved wide receiver and defensive back] runs over to the Nation. He gets us all so hyped because everyone in the Nation goes crazy and actually shows the other team how loud we are. It sets off the expectation for the rest of the game. Or a comeback win.” She mentioned the comeback win definitively, slightly smug. When I inquire her more about this ‘comeback win’, she immediately launched into an erratic, but endearing explanation of the September 24 Manalapan game. She sets the scene. Late September. “Neon Out”. Midd South vs Manalapan in overtime. Midd South scores the game winning point and the Nation jumps the fence and storms out onto the field. “I took a video for the Instagram account, I was  running so fast,” She laughed, showing me a video on her phone. The forward facing camera captured sprinting students, saturated with glee, running toward the fluorescent field. “Listen, you can hear me breathing way too loud in the background.” She holds the phone to my ear, and I hear her excited panting along with hoards of students feverish cheers. “The Nation brings everyone together,” she told me, clearly proud of the spirit she is in part responsible for.

The Nation at the Top

The competitive nature of the football games does not stay within the lines drawn on the field. There’s also a competitive stake amongst other school’s Nations. Shore Savages, an Instagram account with almost twenty five thousand followers, posts about the athletes and teams of the Jersey Shore. The organization names the “Best Nation in the Shore” every year, giving a plaque and massive bragging rights to the winner. Last year Middletown South won the award, and we’re aiming for a second. “[Schools] submit a video or picture of their Nation to Shore Savages to enter the competition, and then by mid October the voting ends.” Carragher explained, “Two schools are put up against each other and then it’s a poll, so it’s the fans that decide. But I do believe since we won last year, and since we’re doing really well in football, there’s a lot of hate toward us. So I do have faith in us and we are the best Nation in the shore, so I think we can win.” Unfortunately there is no portfolio option to compile pictures and videos to prove consistency and commitment to the Nation. However, Carragher submitted a very strong video of the nation participating in the ‘rollercoaster’ during the White Out.

The rollercoaster is a South tradition in which the male Leader of the Nation simulates a rollercoaster, unifying the entire Nation. He raises his arms and thrashes left, right, up and down, movements that the packed Nation mirrors back, with their phone flashlights lit up. At the very end, he jumps in the air, which the student section also mirrors, creating a bouncing wall of flashing lights.

The female Nation Leader, however, has never lead the rollercoaster.

“I could do the roller coaster,” Carragher mused. “Do you want me to do the rollercoaster? I know a bunch of the people wanted me to go out with Sean and do it, and I’m sure Sean wouldn’t have a problem if I wanted to, but I just get stage fright.”

Tradition for South and Beyond

The themes are another highly anticipated tradition of football season along with the roller coaster. Selected every year by the Nation leaders, usually with regular repetition like the “Pink Out” in October, and the “White Out” for the first home game. The season opened with White Out, followed by USA, Gold, Neon, and Pink Out, all simple colors meticulously chosen by our Co-Leaders with the intent to generate as much participation as possible.

Yet, the themes aren’t simply frivolous color coordination and costume opportunities. The October “Pink Out” is in annual honor of breast cancer awareness month, and this years “Gold Out” was for pediatric cancer. Meghan and Sean also decided to include a “USA Out” to honor the thirteen American service members who recently passed in Kabul, Afghanistan. The game took place on September 10, a day preceding the twentieth anniversary of the 9/11 attacks.

“‘These flags are placed to honor the 13 American service members who lost their lives in Kabul, Afghanistan. Thank you for your service. ” She read from her phone as she showed me the sign she  made, proudly fastened to the part of the fence located at the front of the Nation, along with the flags.

“I thought it was a great thing to do. Obviously the Nation is meant to be fun, but it’s also to show awareness,” she explained, “we won the best Nation in the shore last year so we get a lot of attention. When we do something like that, it can get out there. We use our voice to reach topics bigger than just South.”