Super Tuesday 2020: a World of Competition and Unexpected Results 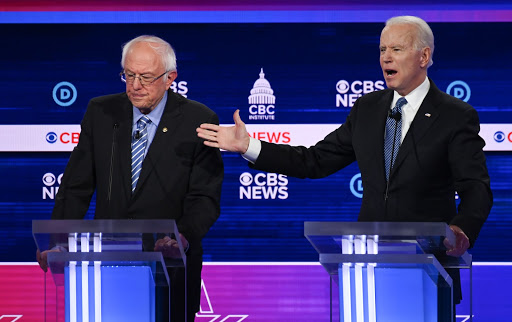 With the 2020 presidential election in a matter of months, much of the United States has been keeping a close eye on the nation’s current political landscape. Super Tuesday, which fell on March 3, delivered results that were likely surprising to anyone who closely followed the Democratic candidates’ campaigns in the past year.
Despite his initial weaker performance in the national presidential debates, moderate candidate Joe Biden was able to rally a wave of support across the country, winning the majority of delegates in Alabama, Arkansas, Maine, Massachusetts, Minnesota, North Carolina, Oklahoma, Tennessee, Texas, and Virginia. Of the 1,991 delegates needed to win the Democratic ticket nomination, Biden gained 633 on Tuesday. Fierce competitor Bernie Sanders, who, in previous caucuses, emerged as the front-runner, fell behind Biden in terms of states gained, as he won the majority of delegates from California, Colorado, Utah, and Vermont. Sanders won 556 delegates, slightly less than Biden. As of Friday morning, March 6, 1,348 delegates were declared, as live updates are still being reported nationally. Biden and Sanders seem to have emerged as the top picks for Democratic voters to choose between as the election in November nears.
President Donald Trump won every state that participated in Super Tuesday for the Republican party; he faced little opposition by other candidates. Of the 1,276 delegates he needs to win the Republican ticket nomination, Trump has so far gained 833.
Progressive candidate Elizabeth Warren saw little support during the Tuesday night primaries, not winning any states, and only gaining 64 delegates; she faced a stinging loss in her home state of Massachusetts, where she serves as a United States Senator. On Thursday, March 5, Warren announced that she would drop out of the race, but has yet to make a statement about which remaining candidate she will endorse.
Three prominent Democratic candidates, Pete Buttigieg, Amy Klobuchar, and Michael Bloomberg, all recently dropped out of the race and endorsed their former competitor, Joe Biden. Earlier in the year, other big names, such as Cory Booker, Kamala Harris, Beto O’Rourke, Bill de Blasio, and Andrew Yang, all ended their bids for the Democratic nomination as well.
With Warren’s candidacy suspended, the diversity seen in the beginning of the race, with candidates of different genders, sexual orientations, and ethnicities, has dwindled to the straight, white male ticket that has commanded much of the nation’s political history.