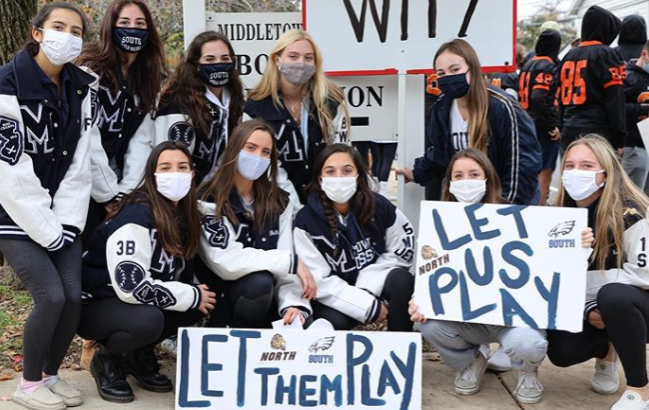 Student-athletes and parents, in reaction to the Middletown Township Public Schools’ recent decision to suspend the remainder of the fall sports season, staged demonstrations on Sunday and Monday to protest the decision.

An estimated 200 students and parents from both Middletown South and North gathered at the Board of Education offices in Leonardo on Sunday, November 15, and about fifty on Monday the 16th, to voice their concerns. Many held signs that read  “Let Us Play” and “We are more than just athletes.”

The decision to halt the season, which includes the traditional Thanksgiving Day North-South football game, came from superintendent Mary Ellen Walker on Friday afternoon, November 13. Walker made this decision as a result of surging coronavirus cases.

“The very last thing we wanted to do was suspend activities,” Walker said in a November 16 piece on patch.com. “Our athletes are in different classes every day and potentially exposed to those who are asymptomatic, yet contagious.” She noted that the district was following instructions from the Department of Health.

Students had a range of reactions.

“It’s just heartbreaking for everything to be canceled so last minute, especially for the seniors,” says one senior athlete, who asked to remain anonymous. “Sports were the only sense of normalcy that we all had from everything going on.”

“I’m very grateful that we were able to have any kind of season at all,” said a senior field hockey player, who spoke on the condition of anonymity. “The only thing I wish that was different was that the administrators [had been able to be] more clear with us [throughout the season].” The field hockey team, as well as the soccer team, was scheduled to play in Tuesday’s state championships.

The call to suspend the sports season was not one that was made lightly.

“All of these difficult decisions are made with the best interest of our students, staff, and school community in mind,” said Matt Kirkpatrick, principal of Middletown South, in a statement to the school community. “The district has worked closely with the health department on a daily basis to ensure that we are maintaining an educational environment that is safe and supportive.  It is my sincere hope that we can return to normalcy at some point in the near future.”

Many in the community support the district’s decision.

“I have not been able to perform live since March because [of Covid],” said senior Alexa Amecangelo, lead singer in a local band. “Most everyone’s extracurriculars have been taken away for months…we should be thankful for the time [that we] have had and just care for the safety of our community.”

One senior, who asked to remain anonymous, was more blunt: “I love my sport immensely, but you can’t party one day then complain about this pandemic the next.”

“Obviously, the past eight months have been trying times for everyone and the suspension of athletics is a major disappointment to all involved,” he said. “I applaud our coaches, staff, and especially student-athletes who worked hard since the middle of July to come together and make the fall season happen. It is a true testament to their ability to overcome adversity that will be a life lesson that they will carry with them forever.”