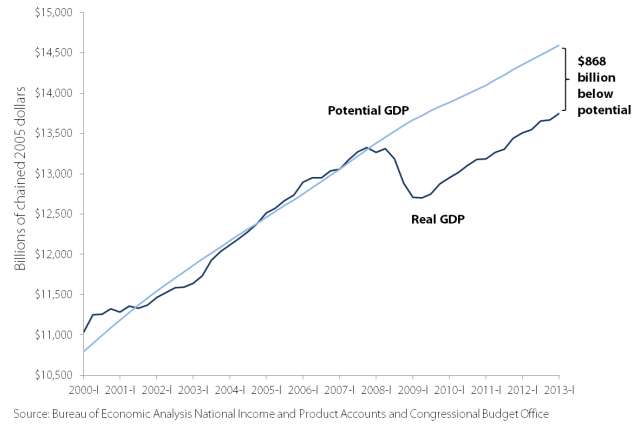 Ask just about anyone, and they’ll tell you how terrible the American economy is nowadays, and how difficult it is for Americans to snag a job in the vicious jungle that is the job market. Is such pessimism warranted? After all, the unemployment rate decreased from 7% in January to about 6.6% in February. This seems to present a paradoxical situation–if our economy is so poor, how could our employment rates be improving?

The key is to look at potential productivity versus actual output. One must remember that the unemployment rate specifically refers to those who are actively looking for a job. It excludes people who are unemployed, but are no longer seeking work. People could cease searching for a job for a number of reasons–many become discouraged after long periods of unemployment and simply give up. In fact, in 2007, the percentage of Americans active in the labor market dropped from 66% to 63%. If these people are not being included in the unemployment rate, then we are being given a skewed image of America’s economy.

In order to get a multi-faceted perspective of the economy, one must pay attention to how the output gap has been fluctuating in recent years. Looking at the graph, it becomes evident that around 2009, the difference between real GDP and potential GDP spiked. This asserts a frightening notion–that the American labor supply has ceased growth.

A blaring issue is discrimination against workers who have been unemployed for extended periods of time. The longer someone is unemployed, the less desirable they will appear in the eyes of employers. In order to address the both the GDP gap and the declining labor participation rate, we must first eradicate this discrimination. Otherwise, a significant close in the GDP gap is merely a lofty dream.