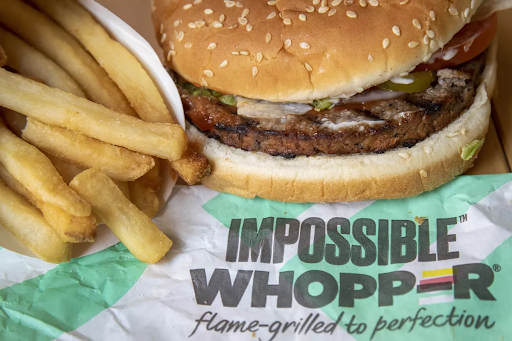 Options of plant-based protein have been becoming increasingly accessible, both in location and price. Plant-based protein involves food engineers using plants to create a food that is similar in taste, smell, look, and feel as meat. Two of the most popular meat substitutes are Impossible Meat and Beyond Meat. Impossible Meat, though more popular on the west coast, has been branching out with their products and have recently partnered with Burger King to create the Impossible Whopper. Personally, I have had the Impossible Whopper countless times since it’s release, and I can vouch for it 100%! It tastes almost exactly like regular meat, and it is not much more expensive than the original whopper with the original whopper selling at around $3.49, and the Impossible whopper selling at around $5.79. In addition to Impossible Meat, there is also Beyond Meat, which is being sold in ShopRite, Target, Publix, Meijer, along with other grocery stores. Beyond Meat has also partnered with TGIFridays, Dunkin Donuts, Carl’s Jr, and Del Taco. With these meat substitutes becoming more and more popular, and available at lower costs and higher levels, our school has been provided with a perfect opportunity to add vegetarian and vegan-friendly options to their menu, as well as to help the environment and improve their student’s health.

However, even though these options are becoming more accessible, there are not as many vegetarian/vegan options as there can and should be in our school cafeteria. As a vegetarian myself, I know many other people in this high school who have some type of dietary restrictions when it comes to consuming meat or other animal products. Whether someone is pescatarian, vegetarian, vegan, or anything in between, it automatically makes it more difficult to find a suitable meal option when ordering from the school considering that so many options are based around meat or animal products. The best meals for people with meat and dairy related dietary restrictions are available at the salad bar as many of the other stations use either meat and/or animal products. The World Market, for example, uses the same pans for each person ordering food. This can cause a student who does not eat meat or animal products to receive a meal that has been cooked in the same pan as meat or animal products. When asked about her view on the variety of school lunches, sophomore and vegetarian Elena Macdonald stated that the one time she tried to order from the World Market, they used a pan that had been previously used to cook meat, and she had bits of meat left over in her meal. Allowing cross-contamination can lead to students eating food that is against their dietary restrictions. Furthermore, the fast-food section consists mainly of pizza, chicken nuggets, and burgers/patties of sorts, all of which contain animal products. And while the Mexican food station has slightly better options, there is no suitable source of protein for vegans/vegetarians.

Clearly, the various stations across Middletown High School South’s cafeteria are not prepared for pescetarian, vegetarian, and vegan students; however, there is a simple and inclusive solution for all.

By adding more meat substitutes into the school’s already existing options for breakfast and lunch, everyone who orders food from the school can benefit. Not only would this offer those with dietary restrictions a new array of options to choose from, but including these substitutes can be a healthier, more environmentally friendly way to obtain nutrients, not to mention they taste very similar to the original. This switch to plant-based protein further avoids supporting the animal industry which uses up an astronomical amount of resources such as water, electricity, and nutrients, all of which can be used to produce a larger amount of plant-based options. Therefore, by choosing meals that have plant-based protein sources we are helping the environment as well as giving people with dietary restrictions more options.

Now, this isn’t to say that Middletown High School South isn’t doing a good job with their vegetarian and vegan friendliness already. As a vegetarian myself, I have seen the cafeteria staff be more than accommodating to my personal needs. When I ordered at the World Market station during Asian Cuisine week, the lady who was helping me offered to use a clean pan so I wouldn’t have any remains from previous students’ lunches, which could have contained meat. Besides this, the school has recently added tofu to their World Market options, and they have a plethora of vegetables, nuts, and fruits for the salad bar. It is evident that the school does care about their students who have dietary restrictions and adding these plant-based protein options would only further increase their support.

Ultimately, Middletown High School South is adding more and more meal options to their breakfast and lunch menu. With their growing presence in the national market, these new meat substitutes would be the ideal addition to the school cafeteria. Not only can they be consumed by all students that attend the school, but their added ecological benefits and health bonuses make it abundantly clear that adding more meat and dairy substitutes into the cafeteria is the best way to go about creating a better dining environment.