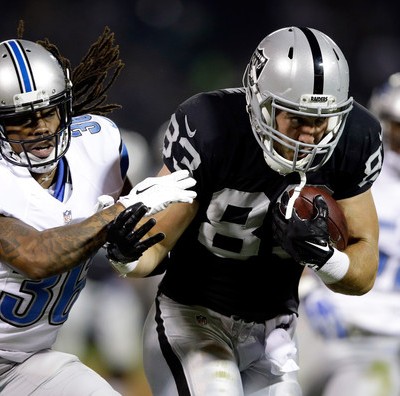 Middletown South’s prestigious football program has developed yet another professional player, as 2010 South graduate Scott Simonson was signed as an undrafted free agent by the Oakland Raiders earlier this year. The 6-5, 250 pound tight end played four years of Division II ball at Assumption College in Worcester, Massachusetts and was named an All-American his senior year. He watched as went undrafted through the seven rounds of the NFL draft, but about ten minutes after received a call from the Oakland Raiders who were interested in signing him to a free agent contract. Simonson quickly agreed to the chance to make the team, and by the next week, he was in California. He was fairly successful throughout all of the preseason, averaging 22.5 yards per catch, but in the second pre-season game he suffered a concussion. The concussion may have held him back, as he was part of the final cuts made in order to meet Oakland’s 53-man roster requirement. Despite being cut, he still managed to make the practice squad and will spend the year with the team.