The Regular Season Is Coming To An End 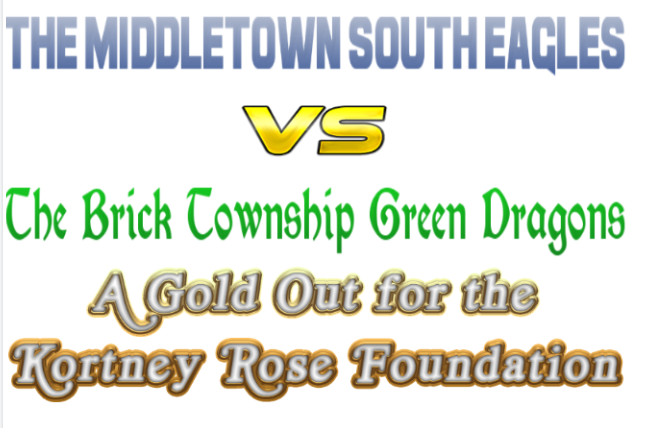 The final game of Middletown South’s regular season on Friday, November 1st, is the annual Gold Out in support of the Kortney Rose Foundation. The Kortney Rose Foundation is a charitable organization focused on finding better cures and treatments for brain tumors, which are the #1 disease killer of children. Please wear gold and consider donating at the game to show your support!

Last season, on a rainy November night at the Swamp, the Brick Township Green Dragons crushed the Middletown South Eagles 42-14 en route to a state championship berth. This season, theGroup IV rivals meet once again in one last bid to improve their playoff standing; for the revenge-hungry Eagles, this is a winnable game that could make all the difference in a bracket where seeding is everything.

NEITHER HOT NOR COLD: The 2019 Green Dragons have been a team that has never had an upset or been upset, which isn’t necessarily a bad thing. Being pummeled by top teams like Mater Dei Prep, Jackson, SJV, and Wall but easily able to dispatch weaker teams like Howell, Brick Memorial, and Freehold Boro leaves Brick Township as pretty average. Brick Township boasts a strong offensive line headlined by many of the same players from last year’s 8-3 team, but their entire defense has only three returning players, which has contributed to their severe weakness in that area. Speedster quarterback/cornerback Anthony Prato is a very dependable holdover from last season, but he lacks solid weapons aside from veterans like running back Joe Armooh and wideout Val Grigorian. Strong senior talent mixed with a ton of inexperienced players has led to Brick Township’s uncharacteristic 3-4 record. While they are not even close the powerhouse they were in 2018, this is not a bad football team at all.

KEEP THE GOOD TIMES ROLLING: The Eagles surprised New Jersey yet again in Week 6 by taking down Rumson-Fair Haven, a team that even beat the once-invincible Mater Dei. Not only was that win earned on the road, but it came with starters Matt Krellin, Brendan Bigos, and Luke Albrecht sidelined due to injury. Notably, the defense that let up 34 to Toms River North held the potent RFH attack to only 3 points, which was absolutely remarkable. However, it was the active trio of the Eagles’ Big 4 in Vinny Condito, Tyler Cuccia, and Chris Lotito that carried the team on their backs: Condito and Cuccia combined for two touchdowns and picked up 151 yards, and Lotito came up clutch twice with a forced touchback and a tipped pass. With Krellin set to return, the Eagles should be even more potent than they were against the Bulldogs. The key issue facing this Eagles team is inconsistency. This team looks unbeatable on some nights and helpless on others, and it has more to do with the Eagles possibly psyching themselves out rather than the opponent doing so. The Eagles can hang with any team in the Shore if they play up to their potential, which was on full display in Rumson two weeks ago.

What are each team’s prospects?

THE GREEN DRAGONS WILL WIN IF…Their defense comes to life. The inability to keep teams off the scoreboard has been the story of this Brick team. They could pull off an upset victory if their young guys are rallied enough to step up and stifle an Eagles attack that, while devastating, has proven to be streaky this year.

THE EAGLES WILL WIN IF…They play their brand of football. Hard-nosed, ground-based, and relentless Middletown South football should be more than enough to come out on top. In spite of the struggles of a 2-4 year, this team is still Middletown South. They beat RBC and RFH for a reason, and if the Eagles compete to their fullest potential, a win will likely follow.

The Eagles will host the Green Dragons at The Swamp on November 1st at 7:00 PM.